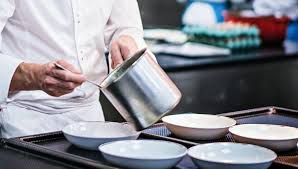 The initiative launched by the journalist Stéphane Méjanès and combined with that of the chef at the Élysée kitchens, Guillaume Gomez, has been successful (“the chefs with the carers”). For the past 15 days now, chefs and cooks have been struggling to serve meals to hospital services all over France. All safety instructions and barrier gestures are obviously applied to the letter.

Our list is far from exhaustive. Numerous collectives, associating markets, halls and chefs, also work anonymously, such as in Rennes (with the help of the association Les P’tits Doudous of the CHU de Rennes) or in Nîmes (CHU Carémeau).

Impacted by the confinement orders, the chiefs, used to living at full speed, find themselves unemployed. We asked them how they spent their free time. Today, Julien Allano, chef of Clair de la Plume, in Grignan.

“I was in full service and Jean-Luc, the owner, called me to warn me. Even if I expected after the schools closed, this announcement was both bizarre and extremely violent. Bizarre because we had to look good in front of the clients, try to keep smiling until the end. I must say that at the beginning there was a form of disbelief within the brigade. That did not last very long : the following events, very violent, showed how serious it was and how very complicated it was going to be.

“We managed to throw nothing away”

I had placed all of my orders the previous week. However, I am quite proud to say that we managed to throw nothing away. I received a big delivery from my goat cheese producer (which was going to close). We will sell these cheeses at cost price to customers, in the form of trays. Today, I go to the restaurant every two days to prepare sous-vide cooked dishes for our foreign employees, interns and interns, Argentinian and Ukrainian. They are housed and confined to Clair de la Plume. All this is done in strict compliance with the safety instructions.

“Every two days, I publish a recipe video to make at home”

At home, I’m with family. I admit that I delegated education to my wife … who is more patient than me. For my part, I run the restaurant’s social media. Every two days I publish a recipe video step by step, to make at home. I’m also going to do a contest with internet users: I’ll offer the winner a cooking lesson on the theme “I cook the leftovers from my closet”. Clair de la Plume also approached Montélimar hospital to see how we could help them … ”

Julien Allano is the chef of Clair de la Plume, in Grignan (26).

For the second consecutive year, the MICHELIN Guide, in partnership with Valrhona, wanted to highlight the profession of pastry chef. Selected by our inspectors, the Passion Dessert 2020 [...]

Everywhere in France, chefs and producers, but also distribution channels, join forces to feed caregivers. The initiative launched by the journalist Stéphane Méjanès and combined with that of the [...]

Impacted by the confinement orders, the chiefs, used to living at full speed, find themselves unemployed. We asked them how they spent their free time. Today, Julien Allano, chef of […]